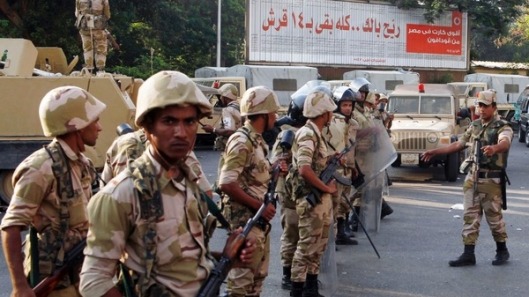 Originally published in The Independent, 4 July 2013

Egypt fell under martial rule as Mohamed Morsi, the Islamist who just a year ago became Egypt’s first democratically elected President, was deposed by his own generals.

Troops and armoured vehicles were deployed around the streets of Cairo as Egypt’s commanders, in a dramatic televised statement, announced that the constitution had been suspended. Standing alongside military colleagues, religious leaders and political figures – including representatives of Egypt’s hardline Islamist Al Nour party – the head of the armed forces General Abdel Fattah al-Sisi called for fresh presidential elections and declared that the head of the country’s Supreme Constitutional Court would be appointed temporary President.

“Those in the meeting have agreed on a road-map for the future that includes initial steps to achieve the building of a strong Egyptian society that is cohesive and does not exclude anyone and ends the state of tension and division,” he said.

Mr Morsi is being held at a military facility in Cairo today. Meanwhile other Muslim Brotherhood leaders were arrested in a crackdown on the movement that won several elections last year.

Mohamed ElBaradei, the Nobel laureate and leading liberal figurehead, declared that the military coup had relaunched the 2011 revolution that toppled Hosni Mubarak. But in a statement published on Mr Morsi’s official Facebook page, the deposed President said that the military’s actions were tantamount to a “full military coup” and were “totally rejected”.

The rapid developments were met with an ecstatic reception in Tahrir Square, the crucible of the 2011 revolt. In scenes which bore a remarkable similarity to those which followed the ousting of Mubarak, tens of thousands of protesters inside the square erupted in wild celebration on hearing the news. Drivers weaved through the streets honking their horns while jubilant opposition supporters launched fireworks into the sky.

But across the Nile to the west near Cairo University, where several thousand of Mr Morsi’s supporters have been gathering for two days, protesters were left dumbfounded by the announcement. “Hosni Mubarak has returned,” said one man, reflecting the belief among some Islamists that the current opposition movement has been swelled or even exploited by elements of the previous regime. At a separate rally in eastern Cairo, Muslim Brotherhood supporters screamed insults about the military. “Sisi is void!” they cried, according to Reuters. “Islam is coming! We will not leave!”

It had been an extraordinary day even by the standards of this country’s recent tumultuous history. Egyptians had woken up with the clock ticking down on a 48-hour ultimatum which the military had foisted on Mr Morsi. Reach a deal with your political opponents, they had told him, or face the consequences. The ultimatum was rejected outright by the Brotherhood. In a speech on Tuesday night, Mr Morsi called on his generals to withdraw their threat. Other senior officials issued statements warning about the prospect of an impending coup d’etat.

“We will stand resilient in the face of this military coup in total peacefulness, and will stand by our just position,” said Mohamed el-Beltagy, a leading figure from the Brotherhood.

In a telling moment, Essam el-Haddad, the President’s national security adviser, had earlier issued a statement on his official Facebook page which appeared to give a glimpse into the siege mentality developing inside the Muslim Brotherhood.

“As I write these lines I am fully aware that these may be the last lines I get to post on this page,” he said. “For the sake of Egypt and for historical accuracy, let’s call what is happening by its real name: military coup.” He raised the spectre of future bloodshed if the military assumed power.

By this afternoon Mr Morsi was still refusing to step down. In an eleventh-hour statement as the deadline approached, he accused the military of “taking only one side” in Egypt’s deepening crisis. At 5pm local time the deadline passed. Still there was no word from General Sisi, yet reports soon began to emerge of troop movements around the capital.

At Cairo University scores of soldiers were dispatched to block roads leading up to the demonstration. A line of troops dressed in riot gear was deployed to form a human cordon on Gamaa Bridge, a crossing on the Nile leading towards the university. Several army jeeps filled with more soldiers were parked bumper to bumper along the road behind them.

“There is a full military coup under way in Egypt,” tweeted Gehad el-Haddad, a senior Brotherhood official, as armoured cars rumbled through the streets of the Egyptian capital. Elsewhere military vehicles were deployed to Nasr City, the suburb where the Muslim Brotherhood has been staging pro-Morsi rallies since Sunday. There were also reports in the state press that armour and troops had been dispatched to Suez, where Mr Morsi’s supporters rallied at a local mosque.

In a further bid to tighten its control on the Muslim Brotherhood – which since Sunday had been trying to face down a full-scale nationwide insurrection against Mr Morsi’s rule – the military issued a travel ban on the President and some of his leading lieutenants.

As Mr Morsi’s downfall drew near, his enemies across the region could barely contain their glee. The Muslim Brotherhood is one of the most powerful factions behind the Syrian rebels fighting to oust Bashar al-Assad, and Mr Morsi has urged the West to intervene on their behalf. With no little irony, Syria’s Information Minister was quoted by the state news agency saying: “Egypt’s crisis can be overcome if [Morsi] realises that the overwhelming majority of the Egyptian people reject him and are calling on him to go.”